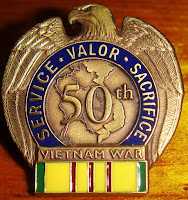 Recently I acknowledged on facebook of the date, February 6, 1969, the 50th anniversary of my entering the U.S. Army. Looking back it’s hard to believe that was actually 50 years ago, just a few months after my 20th birthday.

As I have said to others many times over the years, I enlisted after earlier receiving my draft notice, hoping to receive training in the “job of my choice” instead of automatically being placed into the infantry and shipped off to Vietnam, as my career Army cousin had told me would most likely have happened if drafted.

As luck would have it, on July 13, 1969 I landed at Bien Hoa Airbase in South Vietnam after completing training in my “job of choice” in helicopters from Ft. Eustis, Virginia.

Like most men that I served with, I believed in what we were sent over there to do and did not approve of the actions of the few that seemed to draw the headlines back in the U.S. claiming day to day atrocities and mayhem.

Although aware before going over of the anti-war factions hating on military members, I was naive enough to consider them in the minority. Perhaps they were, but upon my return from Vietnam, they felt like a majority of American citizens that held us in disdain for serving in the military and trying to fight for the freedoms of the South Vietnamese people.

I’m not going to go into the war itself, it still be hashed over whether or not we should have been there, past leaders that sent us there back then today claiming they knew all along they were sending us off on a losing proposition and it being they without the stomach to support us in what they sent us to do.

No, that will continue to be debated well after I am dead and buried and likely never actually agreed upon.

What I do intend to address is how so many of us were given little regard upon return by society in general. And no, not everybody engaged in such fashion and not everyone was “spat upon” physically when returning, but in a sense, all of us were spat upon in a more emotional sense as we were labeled “baby killers,” “trained killers,” “monsters trained in violence” and largely had much of the blame for society’s ills placed at our feet, especially the growing drug problem.

Sadly, American society seems to have issues with returning veterans once the fighting is over and we return to the country we loved enough to place our lives on the line for.

World War One saw the U.S. Government send troops to attack some Veterans seeking financial promises during the Great Depression in what is known as the Bonus Army. Saddest of it all, Officers we held in highest regard for leadership in the coming World War Two led the charge against these Veterans as some were killed and many others injured, falsely accused of subversion by General Douglas MacArthur who claimed, “They had come to the conclusion that they were going to take over the government in an arbitrary way or by indirect means.”

Most of us ‘baby boomers’ grew up holding Veterans of World War Two in high regard, seeing movies and early TV shows portray them as heroic and patriotic. What we were too young to realize was they too were initially held in low regard as many that did not serve feared losing their jobs to returning Veterans and the women enlisted to work the factory’s and manufacture the tools of war were being told to go home now and let then men resume earning the paychecks. It was brought to light in the 1946 movie, the Best Years of Our Lives.

In 1950 we saw our Military sent off once again to a foreign land to oppose the spread of Communism in South Korea. Overshadowed by both World War Two and Vietnam, as well as media censorship, it became known as the “Forgotten War” as little was said about it as through the 1950’s, World War Two continued to be glorified in movies with the Korean War relegated back to a handful of ‘B movies.”

And of course, we all know how the conflict in Vietnam came to dominate the news media as the public was treated to nightly “reports” during dinner in living color with little censorship lots of bloody scenes and body counts.

Most of us serving there knew the reporting wasn’t very accurate and this can be attested to by a story given in a speech by former Army Chief of Staff, Gen. Frederick C. Weyand;

“After Tet [of 68], General Westmoreland sent Walter Cronkite out to interview me. I was in Command of the Forces in the South around Saigon and below and I was proud of what we'd done. We had done a good job there. So, Walter came down and he spent about an hour and a half interviewing me. And when we got done, he said, ‘well you've got a fine story. But I'm not going to use any of it because I've been up to Hue. I've seen the thousands of bodies up there in mass graves and I'm determined to do all in my power to bring this war to an end as soon as possible’.”

“It didn't seem to matter that those thousands of bodies were of South Vietnamese citizens who had been killed by the Hanoi soldiers and Walter wasn't alone in this because I think many in the media mirrored his view.”

Soon the public began hearing of the atrocity of My Lai and subsequent trial of Lt. Calley as more and more the public was led to believe actions as that were condoned by both the troops and our leaders. It wasn’t.

What media never bothered to add to their reports was the actions of a lone helicopter pilot and his crew in bringing the carnage of that day to an end.

It would be many years before the public heard of the heroic actions of Warrant Officer Hugh Thompson and his crew who served and acted as did the majority of U.S. Servicemen there.

Since the Gulf War and War on Terror, the public has repeatedly heard “never again” uttered as we see returning troops honored, applauded in airports and given both the support and appreciation they deserve and have earned. Few realize though, that is due in large part to aging Vietnam Veterans who recall the catcalls and demeaning acts we endured upon return, many trying to hide the fact they were soldiers when possible.

If ever there was a more despicable time for soldiers serving their country, I don’t know when it would have been. To this I refer readers to an open letter authored several years to all Vietnam Veterans by a young lady caught up in the anti-military hysteria of the day expressing her regret.

Today, most people have stopped looking down on us as they did back then, but not all. There are still many who feel they were in the right and actually accomplished something by taking out their aggressions and frustrations on soldiers. Many of that particular group feel they “stopped the war” when in fact they prolonged it by some five years and thousands more American lives lost, hundreds of thousands of Vietnamese lives.

March 29, 1973 saw the last American troops departing South Vietnam as agreed upon by the ill fated Paris Peace Accords that the Communist North Vietnamese soon began violating as promises of aid and support from the U.S. should they violate the accords fell by the wayside, April 30, 1975 seeing the capitol of South Vietnam fall to the Communist North, leaving many of us wondering just what were we sent to do if we were just going to hand it to the Commies so easily after so many American sacrifices.

Some of us felt violated, wasted and sold out, our youth stolen from us over there as too often draft dodgers and anti-military protesters seemed to be held up in esteem as we continued to be subjects of scorn and ridicule in TV But much of shows and movies. Even efforts to honor us in some movies fell flat as we ended up being portrayed as PTSD afflicted misfits unable to handle a simple rejection or hold a job until we deal with our particular ‘demons.’

The First Blood series and the 1985 movie Cease Fire are prime examples, the latter being one I was once told was a “must see” for every Vietnam Veteran. It wasn’t. 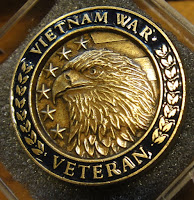 March 29 is now officially designated as NATIONAL VIETNAM WAR VETERANS DAY and as an overdue salute for all that served back then.

I salute all who are wearing or have worn the uniform of any of our branches of the military service.

I encourage readers to reach out to any Veterans you may know and if they served in Vietnam, give them a heartfelt “welcome home.”
LewWaters at 9:26 PM