I don’t know whether to classify this one as a massive pair or of left leaning, Bernie Sanders supported candidate, Peter Khalil, hoping to replace incumbent 3rd Congressional District Republican, Jaime Herrera Beutler seeing the years of ongoing in-fighting and discord in the CCGOP as a possible inroad to gaining Republican votes.

Yes, I was somewhat surprised to see Khalil post an open letter on facebook to both the Clark County Republican Party and chair Earl Bowerman requesting he be allowed to speak before the next meeting and to “introduce himself as a candidate for Congress from the 3rd District of Washington.”

It has to be stated that the Clark County Republican Party itself in past elections chose not to back JHB, save for the 2018 election when a more moderate faction held leadership of the party. The more fringe, far right factions that have held leadership of the county party cite JHB not fully backing issues they deem mandatory while many within the Democrat Party oppose JHB claiming she is “in lock-step” with the far right.

I am writing to you with humility and respect to request that I be allowed to introduce myself at your next meeting as a candidate for Congress from the 3rd District of Washington. Although I am running officially as a Democrat, I think we live in times where we must look past party affiliation and consider that we are neighbors – neighbors who share the same problems: mounting medical debt, a lack of access to information technology in our rural areas, a lack of jobs, crumbling infrastructure.

I am humbly asking that I be given an opportunity to introduce myself and discuss my candidacy at your next meeting on December 7. It is fitting that that day is Pearl Harbor Day, an anniversary of another time our country came together under difficult circumstances.

I can assure you that I will not attack or otherwise speak negatively about our incumbent Congresswoman Jaime Herrera-Beutler. She has served this country for almost a decade and I believe she deserves the respect her office commands. I seek only to be heard and to make my own case for why I should be our next U.S. Representative.

I look forward to your timely reply.

I find it very interesting that Khalil requests the meeting on December 7 as he wrote, “It is fitting that that day is Pearl Harbor Day, an anniversary of another time our country came together under difficult circumstances.”

I fail to see any intent of the country, or even the county for that matter “coming together” as we remain deeply divided as the Democrat Party continues to push for impeachment of the sitting Republican President while others that lean left seem to believe they have a right to assault supporters of the President in public, both verbally and at times, physically.

I also find it remarkable he would make such a request as from what I have observed, his stand on issues are opposite of what Republicans state they stand for, Bernie Sanders Socialism appearing to be where Khalil mostly aligns.

Pretty amazing too is seeing some comments from his supporters;


“LOVE this! Our country, our state, our county, our city need this desperately.”

“A great step in reaching across aisles to work together (we need way more of this) is to literally reach out! Thank you!”

“YESSS!!!
THAT is what I want to see from Democrats representing me!”

Try as hard as I can, I fail to remember any invites from the Clark County Democrat Party extended to any Republican candidate in the past to introduce themselves at a party meeting, given the claim of Democrats now saying they love this and want to see more and such.

Then too, if “reaching across the aisle” is what Democrats desire, why do they not practice it in the legislature or efforts to undo the 2016 Presidential election?


“This is supposed to be the Clark County Republican Party. If Earl responds to allow his introduction of his convictions to the pcos it will be war.”

Given the amount and years of in-fighting seen in the Clark County Republican Party, the war has been waging for many years now.

I’ve yet to see any reply from Bowerman and strangely, no mentions on social media in the far left’s public pages of the request being made.

It is unknown if the CCGOP will entertain this request. I’d like to say of course they wouldn’t, but the party is unpredictable and given the many comments in years past of, “you’re better off electing a Real Democrat over those the far right deems RINO,” those that fall right of center, Khalil quite possibly could gain their spiteful votes since they too despise JHB for her centrist stands. 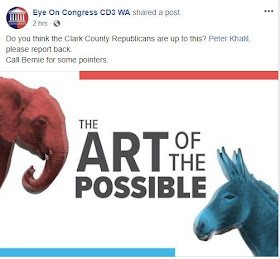 Yes, strange and interesting times we live in.

Update: Comments being made from both sides range from supportive to opposing the effort.

On the right we read from some;

“This is not a wise idea.” Answered by “Are we afraid of differing ideas?”

A former party chair chimes in with, “This liberal Democrat is looking to take advantage of the very public division in the Party,” and “We have enough of our own foxes in the hen house without inviting theirs in.”

Another commenter says, “I think we should let him talk. People can decide how they want.”

Another former chair states, “I can't think of a single reason to spend our time having a Democrat address our PCOs.”

Comments being made from the left;

“ ‘I promise not to say anything mean about JHB’ is not the message a democratic candidate should be sending, in my opinion.”

“[M]y question isn’t is he progressive or not, its why pander to republicans as if you are centrist if you really are not.”

“And here I thought ‘compromise is a sign of weakness/failure’ was reserved for the far right.”

“I like the idea that he is trying to represent the people in his district whether they are blue, red or whatever color you want to stick on that group.”